SpaceTop is a technology and design to make 2D and 3D spacial interaction in a desktop computer. While a traditional desktop uses a keyboard and a mouse for interaction, SpaceTop uses a completely redefined display setup and visualization for seamless 2D and 3D interaction on the objects on the display. SpaceTop allows users to type, click, draw in 2D, and directly manipulate interface elements that float in the 3D space above the keyboard. SpaceTop uses special hardware which included a depth camera and a transparent display. 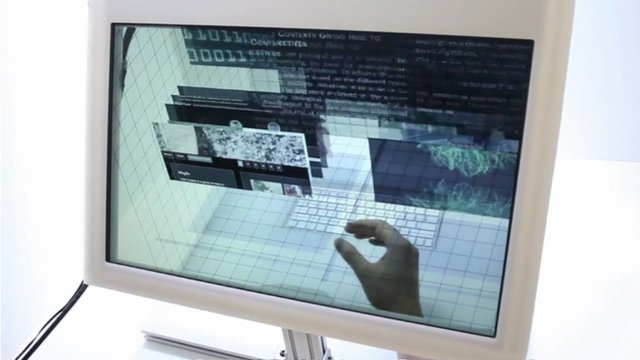 The display will look like a transparent thin screen and we will be able to directly interact with the objects on the display screen.Users place their hands behind the screen to manipulate the icons and apps, while a camera tracks their eye position and adjusts the angle, making it appear as though the box is really 3D. There are a lot of researches going on to make the SpaceTop go commercial. The SpaceTop 3D computer is still in the early stages, and no consumer devices are currently planned.