AMD Radeon RAMDisk – Software solution – Get faster performance than SSDs with existing RAM
This entry was posted in Hardware, Software on July 1, 2013 by Raghavendar T S.

The computers which we are using today comes with lot or RAM usually 8GB or 16GB and even 32GB or 64GB in high gaming systems and workstations. Are we using that full amount of memory? Actually the answer is NO except for the few cases like gaming and that too playing a high end game like Crysis (Crysis series) and Battlefield 3 will push the memory usage to the max of 8GB to 10GB. What happens to the rest of the memory(RAM). Of course it remains unused? This is the case even when we are doing daily computer activities like browsing the internet or when running graphic intensive applications like CAD or video editing or anything. Is there a better way to utilize the unused memory and that too with higher performance than SSD and hard disk? YESSSSSSSS!!!!

Random Access Memory(RAM) are the fastest storage devices compared to SSD and hard disk.But RAM is volatile storage. AMD Radeon RAMDisk is a new and innovative software solution from AMD which enable the user to create virtual drive from the RAM(a part of the RAM can used to create virtual disk). We can run any application or game from the virtual drive created from Radeon RAMDisk which makes the applications or games run faster than when it run on hard disk or SSD. Virtual drive created from Radeon RAMDisk makes the user to store any data as if the data been stored in normal hard drive or SSD and can be accessed in similar way what we do in normal hard drives or SSDs.

So now we are using volatile storage as a non volatile storage with Radeon RAMDisk which increases the performance of the applications or games and we are able to utilize the full capability of the system without wasting the precious memory available in RAM. 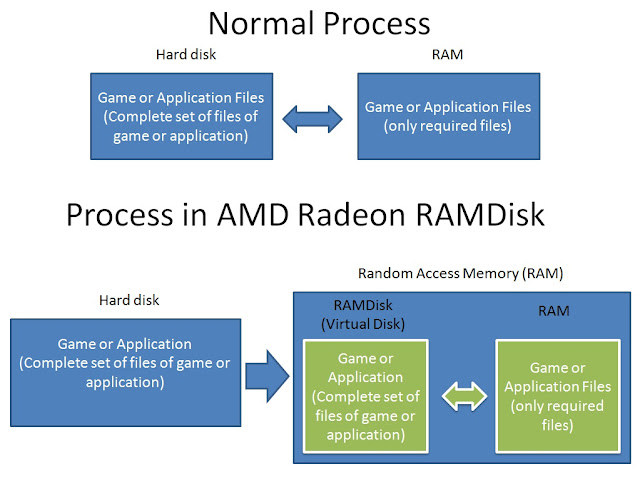 For an application or game to run, the required files will be transferred to and fro from the hard disk and RAM. In  Radeon RAMDisk the entire RAM is split into virtual drive(RAMDisk) and RAM. With Radeon RAMDisk, the entire content of the game or application will be create as virtual disk(virtual disk is the memory in RAM) and that virtual disk will act like a local hard drive. Now when we run the game or application from the virtual drive, the required data will need to be transferred to and fro from within the RAM i.e from the virtual disk and the RAM which makes the process faster than current generation SSD.

From the above benchmark details from AMD, we can see a great performance improvement  in RAMDisk compared to the hard drive and SSD. The benchmarking tool used in Crystal Diskmark.