Smartphones are one of the great gadget that is used in daily life. It almost replaces desktops and laptops for doing our day to day activities in terms of digital world. Some of the daily task which we do with smartphones are E-mail, chat, browsing, downloading applications, watching videos, camera, video recording and many more. The above mentioned applications are usually done in common. Some people use high-end applications to demonstrate animation, graphics, rendering, CAD etc with use of special applications which are exclusive for smartphones. Such smartphones requires high processing power to run those high-end applications. Samsung Galaxy S4 is one such powerful smartphone with octa-core processor.  But is the smartphone really using that octa-core processor with full efficiency? The answer is NO.

What is the problem with current octa-core processor? 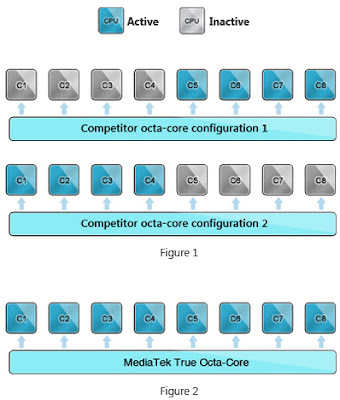 In the above image Figure 1 represent the processor where only one of the quad is used for processing. But in Figure 2 all the 8 cores are active. We may soon see this processor in future mobile devices.