The gaming industry is taking a great leap with the upcoming release of PS4 and Xbox One. Nvidia has already release its high-end GeForce 700 series GPU. With this lineup we also have handheld gaming console  like Razer Edge which is already in market.Along with these gaming products we also have Wikipad, a android based gaming tablet. 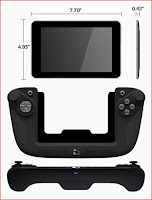 Wikipad is portable gaming tablet which is planned for release later this year for a price of 499 USD. It runs on Android 4.1 (Jelly Bean) operating system. Wikipad is actually a tablet which can be docked into a custom designed controller which makes it a gaming tablet. There are a lot games available for Wikipad from Google Play, PlayStation titles via PlayStation Mobile, and games streamed from Gaikai.